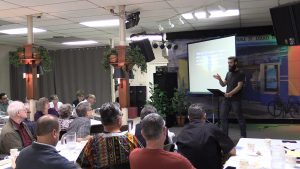 On May 8 & 9, credentialed leaders from Franconia conference gathered for a Faith & Life Gathering to talk about women in leadership, with input from Carolyn Custis James.  In response, Danilo Sanchez and Doris Diener reflect on what they heard.

Danilo:
As a family, we often take walks around our Allentown neighborhood. My two daughters love playing “follow the leader.” We each take turns being at the front of the group, calling out commands like “march,” “act like a dinosaur,” and “neigh like a horse.” Everyone must follow what the leader says, and my girls get so much joy out of making mommy and daddy be silly in public. This may seem like a simple game, but I want my daughters to know from a young age that they are leaders. I don’t know if enough young women hear that message of leadership from their fathers or male leaders at home. Unfortunately, the likelihood that they’ll hear the invitation to be a pastor or leader is even less in the church.

Doris:
The impetus for Carolyn Custis James to seek God’s intention for gendered humans emerged when marriage did not appear on the horizon throughout her twenties.  She wondered what God’s purpose was for young females prior to marriage, or those who were single and widowed.  She sought a scriptural answer that is globally relevant for all women everywhere and always.

Carolyn focused on Genesis 1 and 2 for God’s blueprint for his image-bearers.  She discovered the meaning of ezer (Genesis 2:18) as it is used in twenty-one “warrior” contexts in the Old Testament: an ezer is an active intervening warrior that partners in a battle for God’s people.  The powerful message is the imperative significance of male and female working together for God’s kingdom.

The incredible ingenuity of the tempter in Genesis 3 destroyed God’s original intentions for this earth: It ruined human potential to be his image-bearers as well as it shattered the “blessed alliance” between male and female.  “This was a spiritual equivalent of a nuclear weapon to destroy what was intended to be God’s kingdom strategy for the life-giving maintenance of the earth,” Custis James said.  Jesus’ life, death, resurrection and His empowering gift of the Holy Spirit provide opportunity for his people to live into his original design.

Danilo:
This makes sense to me. The women and female pastors that I know are warriors. God created male and female in God’s own image (Gen. 1:27). Men and women both carry the image of God and can be God-bearers in the world. This means both men and women have equal worth in the kingdom, equal honor to share the gospel, and equal right to leadership and authority. 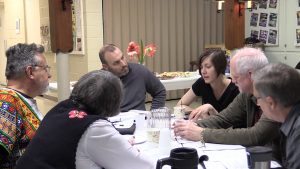 From the beginning of creation, we see God reversing cultural norms. But we male pastors and leaders have not carried on a similar empowerment. We have allowed sexism and patriarchy to thrive in the church. I cannot escape culpability because there have been times that I have not spoken up on behalf of women in an all-male room or provided ministry and leadership opportunities for my sisters in Christ. But I am learning and I want to do better because I believe God created male and female in God’s own image. And I believe that God wants to use both men and women for the work of his kingdom.

Our next Faith and Life Gathering will be August 7-8. We will be considering the dynamics of Intercultural Leadership. 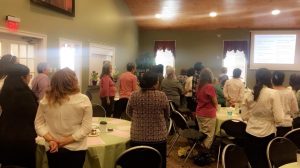 On April 14 approximately 80 women from across Franconia and Eastern District Conferences joined together at Towamencin Mennonite Church for the annual Sister Care Gathering. The theme was “Darkness Unfolding as Light,” with the book of Ruth as the Biblical text.  Cathy Spory, Elementary Principal at Johnstown Christian School, took on the character of Naomi and gave insightful first-

person monologues.  Marilyn Bender, one of four co-pastors at Ripple Church in Allentown and Rose Bender Cook, Marilyn’s sister-in-law and a bi-vocational pastor at Whitehall Mennonite Church, shared their personal and Biblical reflections including speaking of the illness and loss of Marilyn’s husband John, Rose’s brother.

The women were invited to string beads, with knots representing the rough places and the iridescent beads representing those light-filled moments. There was time for conversation and prayer with each other at our tables, and an opportunity to experiment with different ways to pray including praying with color, walking prayer, healing prayer and anointing. 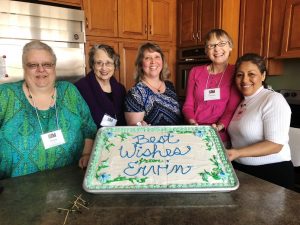 one another. There was much singing together and the women enjoyed a delicious lunch including a wonderful cake gifted to them from MCUSA out-going Executive Director, Ervin Stutzman, from his retirement party the night before.  It was bi-lingual day, with everything presented in English and Spanish, and was a deeply moving day, culminating in the women giving testimony as to where God had unfolded their darkness into light. 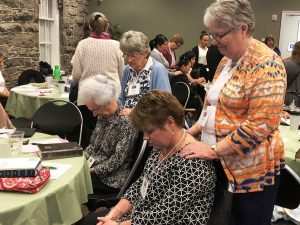 Many thanks to the planning committee: Anne M. Yoder, Coordinator; Pastor Donna Merow; Pastor Doris Diener; Pastor Letty Castro; and Pastor Marta Castillo. Special thanks to Pastor Marilyn Bender, Pastor Rose Bender Cook and Cathy Spory for all their energy and all they shared with the women of our Conferences.

On the morning of Saturday, March 7, approximately fifty women joined together at Nueva Vida Norristown New Life congregation to “set the day apart” for worship, learning, and fellowship. The theme of the day was “Shattering Our Mirrors,” releasing the false image we see and embracing the image God sees when our Creator looks at us. Sandra Dresher-Lehman shared that God’s creativity in His creation of women may not always fit the mold the community has prepared for us and encouraged each to be authentic followers of Jesus. Christine Waanders challenged each to own her personality and to see positive possibilities in what may considered our downsides.

Other speakers included Kristi Wile, Donna Merow, and Ana Giron. Thanks to Marta Castillo and Karisa Barlow who translated, everyone was able to understand. During the time together, the women learned to know new friends, made origami boats, sang, discussed, prayed, looked inside themselves and were challenged on their journeys of faith, washed hands together, and blessed each other. The women enjoyed a delicious lunch, provided by the congregation, over lots of chatter and laughter. What a refreshing, insightful, delightful day!

The conference Sistering Committee is made up of Anne Yoder (chairperson), Donna Merow, Bobby Smisko, Kristi Wile, and Doris Diener. This event was the fourth Franconia/Eastern District Conference Women’s gathering since the 2012 Sister Care event.