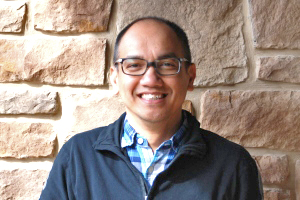 “The most rewarding aspect of my job,” says Leadership Minister Aldo Siahaan, “is being with the churches in their joys and their challenges and learning their stories. It is energizing to be able to support them in those challenges.”

Aldo has worked as a Leadership Minister for about five years and currently accompanies Vietnamese Gospel (Allentown), Bethany Elevation (Queens, NY), and Indonesian Light (Philadelphia). “Each of these three churches are small, and they are each unique, but they are all very open, welcoming, and have a passion to bring more souls to Christ,” says Aldo.  He connects regularly with their pastors and helps troubleshoot issues.

Recently, one congregation wanted to hold a significant event but was not sure where to host it. Also was able to connect them with a Mennonite camp in their area to host the event at a low cost and he also helped them secure funds to cover event costs. “I am grateful to be a bridge between these churches and the Conference in order to provide ideas and resources,” Aldo shares.

For 15 years, Aldo has served as pastor of Philadelphia Praise Center (PPC), a multi-ethnic congregation in South Philly that joined the conference in 2007. The church is made up primarily of recent immigrants, and so issues around immigration are of utmost importance.

Aldo knows first-hand how it feels to be an immigrant. In 1998, Aldo and his brother immigrated from their home in Jakarta, Indonesia to the US after riots against Christians in his home city left him feeling that it was no longer safe to live there. God opened doors for them to connect with the Indonesian Christian community in New York, and then Aldo became involved with a church planting effort in Philadelphia. After six years, he and some friends felt moved to create a new church community, which became PPC.

Understandably, Aldo has a lot of empathy for the other immigrants he accompanies. “As a Christian in Indonesia, I was the minority. As immigrants here, we are also the minority. God is still teaching me that regardless of someone’s condition as a minority, we are able to help others and make a difference,” Aldo shares.

As its leader, Aldo and PPC are always thinking of new ways of serving the community and sharing Christ in the city of Philadelphia. This work has included connecting with immigration-related organizations such as “Know Your Rights” and sharing information about possible ICE raids in the community.

“Being a pastor was never my dream,” Aldo shares. Before coming to the United States, he worked as a radio announcer in Jakarta. When he arrived in Philadelphia, he worked for Pan Asian Radio and as a paralegal for an immigration law firm. But his friends continued to insist that he was the leader of their new church. “We knew that we needed to form this church,” Aldo remembers, “but the question still remained about who would lead it. God used the people around me to call me to become a pastor. I didn’t know I had this calling, but God used other people to tell me. And God has slowly opened up my gifts as a pastor.”

In his free time, Aldo loves to watch comedians and political commentators Stephen Colbert and Trevor Noah. “It refreshes me to be able to laugh and hear their commentary on current events,” Aldo says. He also enjoys spending time with his wife, Viviani, and playing with their young son, Eden.