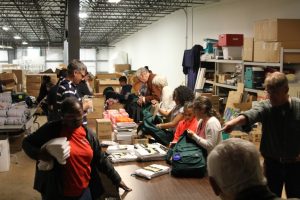 On the night of October 18, 2019, a group of adults and children worked for several hours at the Material Resource Center, a part of Mennonite Central Committee’s ministry in Harleysville, PA. The objective of the project was to put together kits of basic supplies that will be delivered to migrants who crossed the border from Mexico. Members of Franconia Conference contributed the helping hands and gave resources to make the project a reality: 370 kits were packed that night, and the rest of the $20,000 donated by the conference (via churches, individuals and a matching grant) will be sent to MCC Central States to purchase additional supplies. 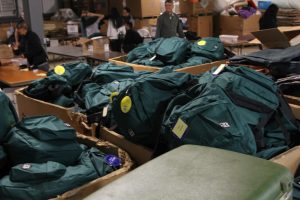 The kits consisted of a set of useful products such as towels, notebooks, pens, water, and other basic necessities for people who have recently been released from migrant detention camps.  Although simple, these kits represent a direct and tangible way to contribute to the needs of immigrants who enter the United States looking for a new home.

The work on the 19th was an example of solidarity and mutual help.  Thanks to 20 volunteers from three southeast Pennsylvania churches (Indonesian Light Church, and Philadelphia Praise Center, Plains Mennonite Church), the kits were efficiently packed in a large collection of green backpacks and were ready in time to be sent from Harleysville to be distributed through MCC Central States. 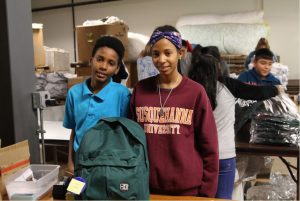 Each of these churches, in addition to belonging to Franconia Conference, is a community that includes many first- and second-generation immigrants. Although these immigrants come from different places on the map, such as Indonesia and Mexico, they each have left behind what is familiar to embark on a trip, marked by difficulties and uncertainty.  In understanding and solidarity, they gathered to fill backpacks as people who are aware of the pain and joy of migration.

The children were encouraged to share which countries they were from and they diligently helped for the almost-two-hours that the work took. After the backpacks were filled, the workers gathered together to join in a prayer led by Pastor Hendy Stevan Matahelemual of Indonesian Light Center.  They prayed specifically for those who would receive the kit and in general for each person who undertakes the trip and who seeks a place that guarantees their rights and, even, saves their lives.