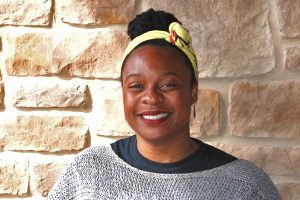 Chantelle Todman Moore loves it when individuals or congregations are getting curious and imaginative about what the church can look like.  She sees this work as integral to discipleship, “when people begin to think really deeply about their own identities like they’ve never had to before; this is the first step to transformation.”

Chantelle Todman Moore is the Intercutural Leadership Coach for Franconia Conference. Over the past year and a half of her time on staff, Chantelle’s work has focused on organizing spaces and conversations for pastoral and lay leaders in the conference who are part of the “global majority,”* though not part of the majority culture of Franconia Conference.

These conversations are opportunities to pray together, fellowship, share dreams, and express laments. A primary example is the annual Nations and Generations gathering that Chantelle is helping to organize this fall. The gathering is a time of prayer, worship, visioning, and connecting a diverse group of ministers. This year’s gathering will take place on November 1 just before Conference Assembly. 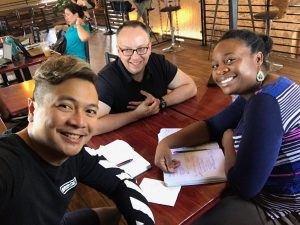 The work that excites Chantelle most is coaching congregations seeking to grow in intercultural capacity and become anti-racist.  Recently, the elders from Plains congregation asked the Intercultural Team to help them think through their next steps in their ongoing movement toward intercultural competency.  “I enjoy working with congregations that are ‘doing the work’ and when I can help them be a catalyst for deepening those efforts,” Chantelle shared.

Chantelle grew up in south Florida in an Assemblies of God church and received an undergraduate degree in International Community Development and an MBA in International Economic Development. It was in graduate school at Eastern University that she encountered Anabaptism through books by Eloise Meneses as well as the work of Mennonite Central Committee (MCC). She began attending Oxford Circle Mennonite with Sam, whom she later married. Chantelle was drawn to the centrality of social justice as a sign of faithfulness within Anabaptism.

Chantelle quickly began to take leadership roles in Mennonite institutions: working as the Philadelphia Program Coordinator for MCC, serving on the board of Eastern Mennonite Missions (EMM) and getting involved with the Women in Leadership steering committee of MC USA to co-plan  the Women Doing Theology conferences, helping to organize the Future Church Summit at MCUSA Convention 2017, and speaking at the Hope for the Future conferences.

Entering into the wider Mennonite Church after her experience in the intercultural reality of Anabaptism in Philadelphia was a bit of cultural whiplash, Chantelle reflected.  This is what makes her work so important.  “Jesus modeled crossing the bounds of what the world labeled as ‘other’ and we should be doing the same. Those who encountered Jesus in the scriptures were transformed but Jesus was also transformed as he crossed boundaries,” she continued. “So yes, it’s about justice and doing what’s right but, most of all, it’s about following Jesus and allowing our whole being and worldview to be transformed.”

In addition to her work with Franconia Conference, Chantelle is the co-founder of Unlock Ngenuity, a consulting, coaching and therapy business.

Chantelle and Sam have three daughters. When she’s not coaching and supporting individuals and communities in developing intercultural understanding, she loves to grow food through gardening and dabbling in aquaponics.

*The term global majority seeks to recognize that the vast majority of the people in the world consider themselves non-white.