I recently read The Good Neighbor by Maxwell King.  This biography detailed the life and work of Fred Rogers, creator of the children’s television show, Mr. Roger’s Neighborhood. The TV show was unlike any other children’s show, due in part to the issues Mr. Rogers addressed.

The show dealt with topics like death, race relations, and sibling jealousy.  After President Reagan was shot, Mr. Rogers had an entire segment on assassination.  Because he knew the children in his audience were hearing adults talk about what happened, using unfamiliar and scary words, Fred addressed it in an age-appropriate way.

When asked why he incorporated such weighty issues into a children’s program, Rogers responded, “Whatever is mentionable is manageable.”  If we’re able to name and discuss an issue, it becomes more manageable; we can begin to process it in healthier ways. And the inverse is also true: when we fail to talk about difficult issues, our silence actually gives them more power over us. Whatever is mentionable is manageable. 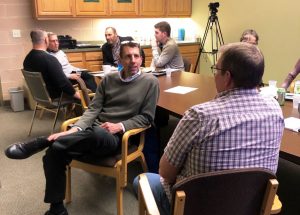 Each quarter in our conference, the Faith and Life Commission plans gatherings for pastors and credentialed leaders to discern, study, and pray together.  The focus is on relationship building and expanding perspectives, not decision-making.

This year’s theme for these gatherings is identity. The February gathering focused on sexual and gender identities. James and Jane Mast (Methacton congregation) shared informatively, rather than directively, as a psychologist and biologist (respectively).  Following their presentation, which offered distinctions between terms like biological sex, gender identity, and sexual orientation, we discussed in small groups.

I was struck by and grateful for what I observed in those small groups. We were a  group of diverse believers from a variety of places, with varied experiences and perspectives,  talking openly about this topic. It wasn’t easy, and we didn’t all agree. But we were there. Together. Talking. Whatever is mentionable is manageable.

Of course, each of us will need to interpret what we heard through our own cultural and theological lenses.  But in order for us to respond with grace and truth to the questions so many in our society are asking about gender, sexuality, and identity, we need to be able to talk together about hard things.

I fear too often we’ve neglected difficult conversations. We are content to retreat into our echo-chambers with like-minded allies and avoid those with whom we disagree. One of the most profound discoveries of my 15 years in pastoral ministry is that there are good, faithful, honest, brilliant, Bible-believing, God-honoring, Jesus-loving, Spirit-filled people all across the theological spectrum.  I am a better person and better pastor when I’m in dialogue with a broad range of people and perspectives.

I left the Faith and Life gathering last week feeling overwhelmed, confused, and encouraged: overwhelmed by the volume of new information, confused how our Conference can faithfully navigate the complexities of our deepest identities, and ultimately encouraged to have learned something new. I was encouraged to be in a circle with people who disagree profoundly on issues of sexuality but who respected and honored and prayed for one another. I was encouraged that pastors and leaders are willing to engage the hard questions. I was encouraged by the honesty,  vulnerability, and humility demonstrated by my sisters and brothers in that room. And I was encouraged that though we disagree on things, what we do agree on – the Person and Work of Christ – is far more powerful than what divides us.