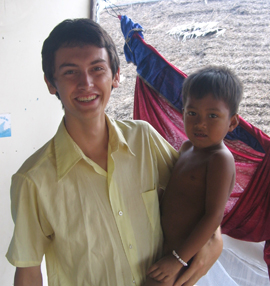 And so the adventure comes to a close. My time left in Cambodia is short. I guess the best word to sum it up is overwhelming.

Overwhelming because I have to start thinking about what Iâ€™m going to tell people when they ask me, â€œSo how was Cambodia?â€ Because I have six weeks worth of experience that nobody really knows anything about. How do I talk about six weeks of my life, six weeks that are filled with pages upon pages of memories…people, places, events, food, problems, joys, the ins and outs of everyday life in the village. Itâ€™s a daunting task, one Iâ€™m beginning to pick away at with this reflection, and certainly a process that will continue for years.

Overwhelming because I come home to a family in the city that so obviously missed me and is glad to have me back and a mother who is heartbroken that Iâ€™m leaving again so soon. My language skills have really improved, which I wouldnâ€™t have realized except that I can communicate with my family here with so much more ease than when I left. It feels like I could just be settling in for the long haul instead of packing my bags and saying my goodbyes.

Overwhelming because Iâ€™m saying goodbye to friends, family, food…but more than that. Iâ€™m saying goodbye to a city that Iâ€™ve grown to love, to a country that has introduced me to the world, shown me a piece of just how little I know about things. Iâ€™m not putting the Cambodian book away by any means, though I do need to finish the chapter Iâ€™m on and put it a way for a while. I hope to return, but I know itâ€™s possible that I could be saying â€œgoodbye forever.â€

I want to share briefly about my life in the village. To give a picture of Kampong Phluk and what I experienced seems such an impossible task, but if I just start somewhere perhaps the words will come and the picture will take shape. I have a nephew. He is beautiful; brown skin, dark hair and eyes, painted finger and toenails, a beautiful smile though featuring teeth that look painfully diseased. Samadee is his name, but we all call him Dee. He runs around naked most of the time. He is five years old.

I love Samadee. He loved to play with me, especially when I was trying to read or write. He would come up to me and plop his naked bottom right down on my book, then heâ€™d just look at me and smile. He loved being tossed onto my shoulder and spun around. He also loved a game that involved him trying different forms of bodily harm out on me and asking, â€œDoes this hurt?â€

I got lucky again. My host family experiences have been the most meaningful parts of all of Study Service Term. In Kampong Phluk I was once again adopted into the family, perhaps even to a greater extent than in Phnom Penh…but itâ€™s too close to call so I wonâ€™t. I had two host sisters, one of whom was Samadeeâ€™s mother, a mother, and three â€œsistersâ€ who were teachers at the school where we taught and lived with our family when school was in session.

I felt like a son in this family, doing chores (though not as often as I would have liked), singing and dancing with the fam, asking questions about where people were and when theyâ€™d be returning I canâ€™t explain the feeling, but imagine that youâ€™ve been adopted by a wonderful family and you almost forget youâ€™ve been adopted.
One night my Kampong Phluk mother came out to the porch where I slept and found me looking at the stars. She asked me, â€œDo they have stars in America?â€ Yes, I replied. â€œAre they the same?â€ Yes. â€œDo they have a moon in America?â€ Yes, Ma. â€œThe same?â€ Yes.

She sits for a little bit.

Yes, Ma. Only one sky; poetry in its simplest form. God speaks Khmer, Iâ€™ll tell you that much.

Greg Yoder participated in this spring, along with Krista Ehst (Perkasie congregation) and Sheldon Good (Salford congregation). The term included stays with families in both urban and rural settings.Greg wrote this journal to share his thoughts back with friends and family in the States and graciously agreed to publication in Intersections.