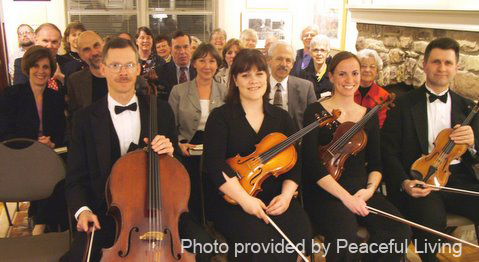 For Peaceful Livingâ€™s founder Joe Landis, growing up in southeastern Pennsylvaniaâ€™s oldest Mennonite community has been to know what a family singing circle felt like. At home the sensation focused in table fellowship and story-telling. At church there was the sacrament of singing together in a folk harmony. He joined this harmony singing as a child, hardly noticing how he had
learned to do so. â€œWe thought anybody could sing like that,â€ he reflected.

Both home and church singing settings nurtured a powerful, yet sometimes taken for granted, sensation of being included. Even the voices of those, like Joeâ€™s fatherâ€™s seemingly ancient greatuncle Jonas L. Alderfer whose learning disability kept him from learning how to sing the right notes, were folded into the haunting sound, not of performance but community. â€œJoneyâ€ and his peers were there at the table and in the hymns. Only with such taken for granted completeness did the sacraments of table and church fellowship feel valid. Only with those hoarse voices did the harmony sound fully like home.

Hymns endear us to each other. Old ones connect us with souls who sang them before we were born and those who will sing them when our own voices fail. Hymns connect us with moments in the unfolding of our own individual and communal faith stories. New words, tapping deep wells, enrich old truths and surprise us with their gift of insight. Both singer and hearer are blessed in reprising foundational thoughts of supplication or praise in a medium that lends to our ordinary minds the superior gifts of poet and composer. We make great hymns our personal property. We lift our hearts corporately reminding each other that we belong to God together.

Not only persons familiar with traditional acappella congregational singing can be touched by its sense of family as the four-part sound creates an air of community. Often, even persons unfamiliar with the experience respond to its warmth. Joe thought this experience ought to be shared but wondered how.

Joe and a friend took sometime imagining what it would be like to hear humble meetinghouse strains profoundly ennobled by the string section of a major orchestra. While realizing that it was beyond anyoneâ€™s means, they knew the music would be nice. With the sense of family our hymns produce, Joe invited friends to bring those encircling harmonies, on a chamber rather than symphonic scale, into an album. In April and June 2005 Stan Yoder, an instrumental music teacher and performer, led a string quartet to accompany an ensemble of mostly nonprofessional singers who have sung since childhood in local congregations. The album, Spring Hymn Sing, was released last year.

The seventeen hymns and spiritual songs can all be found in Hymnal: A Worship Book (1992), the collection currently in use at many Mennonite and Brethren congregations. The album includes a cavalcade of Isaac Watts, Count von Zinzendorf, Beethoven, African-American spirituals, Brian Wren, and the list goes on. With such teeming memories and a God who, the Psalmist reminds us, â€œsetteth the solitary in families,â€ how can we keep from singing?

Story behind the cover art: Cover art for â€œSpring Hymn Singâ€ was created by Ramin Dabiri of Wynnewood, PA. Ramin is a participant in Peaceful Livingsâ€™ Creative Gifts Community Mentoring Program. He has a cognitive disability due to a birth defect. Ramin enjoys the ability to express himself through art. He also enojoys music and is fluent in three languages including Turkish, Persian, and English.