by Benjamin Bolaños and staff 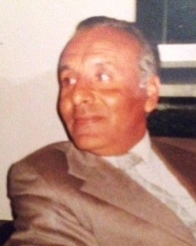 Dr. Abraham Israel Bolaños of Allentown died peacefully at his home on Tuesday, September 16, 2014. He was 88 years old.

Dr. Bolaños was born in El Salvador, and was a pastor in the Nazarene and Mennonite churches for more than 45 years. He and his family came to the Lehigh Valley in 1987, when he began a church planting ministry with Franconia Mennonite Conference. He had first become acquainted with the Mennonite church in El Salvador in the 1960s, when one of his brothers immigrated to Canada and received assistance from Mennonites there. Dr. Bolaños  studied in Texas and lived in El Salvador off and on until the late 1960s. He left during that country’s civil war.

He received a doctorate in theology in 1987. Though he achieved much academically, Dr. Bolaños remained a “people’s pastor” and was deeply committed to the Hispanic community.  Over the course of his professional life, he founded several Hispanic churches in El Salvador, Arizona, Ohio, New Jersey, Iowa, and Pennsylvania.

Dr. Bolaños’ family will remember him as deeply pious, tender and generous. He wrote much poetry in Spanish and wrote several books on theology; He loved playing the guitar and had a strong tenor voice. His love of reading and playing guitar was equally matched by his love of humor and joke telling.  He was extremely funny and always had a trick or joke to tell.

Services were held  September 22 at the Primera Iglesia Bautista Hispana in Bethlehem. He was buried Hazelwood Cemetery in Rayway, New Jersey.