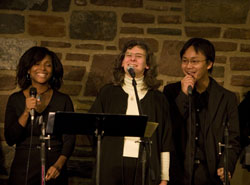 Anna Musselman, minister of church programs at Salford Mennonite Church, told her congregation that the walls of their historic meetinghouse would hear new songs and sounds during the Franconia Conference Fall Assembly held at the church on November 10-11 near Harleysville, PA. Musselman was right. Praises rang out for 24-hours with words spoken in Indonesian, Spanish, and Vietnamese (the worshipping languages of the conferenceâ€™s congregations) while leaders gathered to celebrate, discern and learn.

Kicked off with energetic worship led by a multiethnic, multilingual worship team composed of members of Nueva Vida Norristown (PA) New Life, a multicultural, bilingual conference congregation, and Philadelphia Praise Center, a congregation composed mostly of recent immigrants from Indonesia, the assembly focused on the theme of â€œCentered in Christ, Empowering Others.â€ Conference delegates and guests gathered from as far away as Chile to celebrate connections that cross lines of ethnicity, language, and denominational differences. The 24-hour worship featured groups from congregations with a variety of affiliations.

The assembly included the affirmation of Philadelphia Praise Center as the conferenceâ€™s newest member congregation. In the litany read by conference leaders they said together, â€œIn the spirit of Godâ€™s biblical mandate to protect the vulnerable and in the spirit upon which Dutch forebears 300 years ago sent pastors to shepherd fledgling congregations in the New World, we acted on behalf of Franconia Mennonite Conference, risking protocols and precedents to use our 300-year old residency in this land to . . . provide leadership for a fledgling congregation in Philadelphia.â€ The conferenceâ€™s board acted in June to accept PPC as a member in order to secure pastoral leaders for the rapidly growing congregation.

While the walls of the Salford meetinghouse heard new songs and sounds, the conference ended its work for the day with a decades-old affirmation of simple and nonresistant faith this time read in Indonesian, Spanish and Vietnamese as well as English.