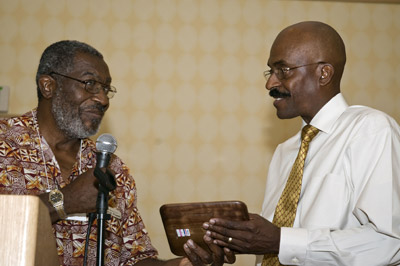 SAN JOSE, Calif. â€” Much of Ertell Whighamâ€™s ministry revolves around bringing people together in Christ to form new things. His work toward collaboration among diverse urban constituents earned him the 2007 George and Pearl Kauffman Urban Leader Award.

Whigham, Franconia Mennonite Conference’s Director of Congregational Resourcing and Equipping, received the award at the 2007 Urban Leaders Network meeting. The honor includes $500 for rest, renewal and revitalization for urban leaders, a passion of the Kauffmans for whom the award is named.

“I thank God for the collaboration Iâ€™ve been able to experience with other leaders,â€ Whigham said. Whigham oversees the area of congregational ministry for Franconia Conference and is a part of the leadership formation team. He added that hishis responsibilities with Franconia Conference and (Philadelphia Urban Ministry Partnership) PUMP have fed his ministry and the groupâ€™s calling to be John 17 people â€“ united for Christ.

As he introduced this yearâ€™s recipient, John Powell, co-director of Mennonite Mission Network’s U.S. Ministries, called Whigham a kindred spirit that has been able to stir up waters of change to seep into places that are hard to see or reach. His influence, Powell said, was evident in that three nominators suggested him for this yearâ€™s award â€“ the most recommendations among the 15 urban leaders nominated.

One group of nominators called Whigham a high-energy person who has inspired and trained others for ministry while ministering himself. â€œErtell uses his comfort level at the intersection of business, church and community to involve people in the relevant work of being followers of Jesus wherever people find themselves,â€ the group wrote.

As a teen, Whigham enlisted in the United States Marines, serving in Vietnam and later as a recruiter. He continued recruiting even while attending a Mennonite church, until he had a change of heart after a prayer session. Today, Whigham is a committed pacifist and actively works in counter-recruitment.

George and Pearl Kauffman were church planters with a deep concern for and commitment to urban ministry and leadership preparation. Following their death, their daughter and son-in-law, Jeanie and Lyn Hershey, set up a fund to help people involved in urban ministry find respite.

According to Powell, the Hersheys realized that many ministers were too busy to take advantage of the opportunity for rest, so they replaced the fund with the Kauffman award, which honors an urban leader and includes a cash gift to be used for respite or leadership development. Previous winners include B. Elaine Bryant of Englewood Mennonite Church, Chicago, and James Wenger of North Baltimore Mennonite Church.

Honorees must be actively engaged in a United States urban setting for a minimum of five years, working to combine evangelism with peace and justice.

Nominations for the 2009 Kauffman award may be made online.