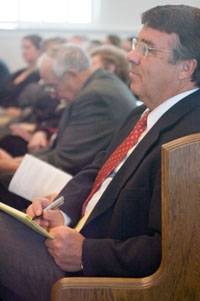 I sat in a pew close to the front of the sanctuary and marveled. My baby brother Michael, age 47, was about to become an ordained minister.

For me, it wasn’t a question of his being qualified, only that the process leading toward this special day had been under way for some time and I wasn’t fully aware until an invitation to the service arrived:

“Join us in a service of ordination for Michael S. Bishop as minister of music and worship, 9:30 a.m. Sunday, Nov. 26, at Blooming Glen Mennonite Church.”

Michael? A full-fledged, credentialed pastor, serving a congregation of some 700 members? I decided on the spot that my wife Anna and I would do our best to be there.

This was only the third time I’d attended an ordination. It seemed a solemn occasion, recognizing the serious business taking place. At the same time, a sense of anticipation and celebration permeated the proceedings. A recurring theme was a strong sense of the congregation affirming and calling Michael to this significant task.

The process started in 1989 when Michael and wife Brenda began attending the Blooming Glen church with Michael accepting a role as “music coordinator.” This eventually led to his being licensed as minister of music in 2002.

In his ordination message, church historian, veteran pastor and master storyteller John L. Ruth of Harleysville, Pa., identified the components necessary for individual members to form an orchestra of worship and praise, based on Ephesians 5:19.

“We resonate to music, harmony and rhythm, especially when we sing,” Ruth said. “Michael has the gift of song, a gift with a significant tradition in the Mennonite Church. Singing is a spiritual feast; we are called to be stewards of this rich treasury and heritage.

“In our hymn singing, we offer our hearts in praise to God and let the words dwell in our hearts richly,” Ruth told the congregation.

“Michael has the gift of enthusiasm, a sign that this congregation recognizes in this commissioning,” he said, adding: “But it’s as important to love the church as it is to love its music. When this happens, you can sense it in the singing.”

Following the message and comments from Blooming Glen colleagues, Michael and Brenda and their children Greg, Jon and Megan gathered in front as James M. Lapp, senior ministry consultant for the Franconia Mennonite Conference, led the ordination charge. 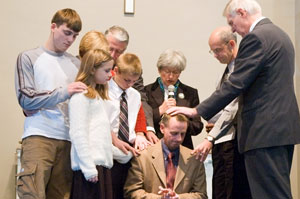 Lapp anointed Michael’s hands for ministry, and several persons led poignant prayers, recognizing the variety of expectations that people have for pastoral leaders. The congregation then responded with a litany of commissioning.

The ordination was a holy moment that I felt privileged to be a part of Afterwards, I asked John Ruth about the symbolism and significance of ordination.

His response: “Ordination means that the congregation has placed a deep level of trust in the person being recognized. The life, health and spirituality of the church is seen as ‘safe’ in the hands of this person.

“It’s somewhat analogous to the Quaker tradition of ‘recording a moment,’ an official recognition of the spiritual gift or gifts that the one being ordained has been exercising,” John said.

Beyond this, “It is accrued evidence that a special need within the congregation now becomes more explicit. In this case, it’s a recognition and confirmation of Michael’s special gifts in leading music and worship.â€

Ruth noted that the ordination process included involvement with the larger fellowship of Franconia Mennonite Conference with certain rights and privileges arising from that association.

What all this will entail for Michael on a daily basis is not fully known, as congregational leadership at Blooming Glen is in transition, with the lead pastoral couple planning to retire and another taking a pastoral position in Kansas. Mike will also continue working full time as co-owner of Bishop Excavating with his brother, Bob.

During the service, I reflected on the incredible demands placed on persons in pastoral ministry – the variety of expectations, the need to juggle chainsaws, parishioners pushing in different directions at once, the temptation to misuse the power and authority that comes with the position.

It requires an extraordinary combination of thick skin, a heart of love and compassion and perseverance when the going gets tough. I hope and pray that the expectant and celebrative atmosphere that pervaded the congregation, evidenced in part by the spirited singing, will characterize Michael’s ministry at Blooming Glen.